"Holy deadlock! A husband turns against his wife and her presumed suitor. But is it all a fatal mistake?"

The Thing From the Grave

Three's a Crowd is the fifth episode of the second season of Tales from the Crypt and the eleventh episode overall. The episode aired on May 1st, 1990.

A down-on-their-luck couple (Gavan O'Herlihy and Ruth de Sosa) are invited to a cabin owned by their wealthy former best man (Paul Lieber), but the unstable husband is convinced that his wife is having an affair.

"Hello, party animals. Are you ready to bop till you drop? Dead, that is. Tonight, I've chosen a fiendish little tale from my hold of moldy oldies. We've been invited to an anniversary celebration of holy deadlock. You know, to love and to perish. For richer, for horror; in sickness and in stealth; till death do us part. This is one anniversary the husband will never forget."

"That's what I call dragging your wife to a party. I guess Richard was the guest of horror, after all. Just goes to show you what can happen when you let your imagination run away with you. Here's to your bad health. See you next time, boys and ghouls." 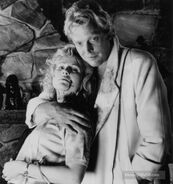 Retrieved from "https://tftc.fandom.com/wiki/Three%27s_a_Crowd?oldid=10912"
Community content is available under CC-BY-SA unless otherwise noted.