"A jilted Romeo murders his sweetie's suitor...but maybe there is such a thing as a love that cannot die."

The Thing From the Grave

Tales From the Crypt #22

"The Thing From The Grave" is the sixth episode of the second season of Tales from the Crypt and the twelfth episode overall. The episode aired on May 8th, 1990.

A supermodel (Teri Hatcher) and her photographer (Kyle Secor) fall in love. When the model's abusive boyfriend (Miguel Ferrer) learns of their affair, he sets out to kill the two of them. However, he soon gets a nasty surprise as love proves to be quite very strong, even in death itself.

Devlin Cates (Kyle Secor) furiously drives up a mountain side and stops in front of a remote cabin. Mitch Bruckner (Miguel Ferrer) is waiting outside; Devlin demands to know if she is alright. Bruckner insists she’s ok, then shoots Devlin in the shoulder — sarcastically asking if that was the shoulder she “cried on”. He chases a wounded Devlin to a nearby grave, hurling taunts that she belongs to him and not Devlin. After shooting him dead, Bruckner dumps his corpse in the grave and buries him.

A few days beforehand, Devlin is working a photo shoot and is smitten with his beautiful centerfold Stacy (Teri Hatcher). Their productive day is interrupted by Stacy’s fiancé Bruckner — who is also revealed to be her manager. He coaches Stacy and threatens Devlin when he tries to intervene. Devlin and Stacy bond later on — she apologizes for Bruckner but Devlin is more concerned for her safety. He gives her a spare key to his apartment and offers her a place to stay if things ever get too rough.

Sure enough, Stacy takes his offer up one night. After commenting on how forward they’ve been with each other, they share a passionate kiss. He gives her a necklace that he claims keeps a promise for anyone who holds it. Stacy tells him she’s horrified of leaving Bruckner in fear of what he’ll do; while holding the necklace, Devlin promises to protect her. As they make love, Bruckner spies on them from across he street.

Days later, Devlin gets a call from Bruckner, who tells her Stacy is in trouble and ran off to their cabin. Claiming she only wants to talk to Devlin, Bruckner lures him out and the scene from earlier replays. Stacy spends the following week searching for him before Bruckner confronts her about their affair. Instead of arguing, he manipulates her into thinking Devlin moved on from her and to give their engagement another shot. Stacy later visits Devlin’s apartment and finds the voicemail Bruckner had left him; he ambushes her there and drags her out.

Stacy is tied up and taken to the cabin, where Bruckner strips her down to her lingerie. She screams for help, but Bruckner tells her “Romeo” won’t come for her as he has killed him. As he prepares to rape her, someone outside calls for Stacy. Bruckner searches and runs into the re-animated Devlin — revived by Stacy’s cries for help, Devlin attacks Bruckner who tries to shoot him. The bullets go right through his body — a horrified Bruckner is chased back to the grave and falls in. When he tries to get out, Devlin slams the shovel down on his hand and slices all of his fingers off. Stacey meanwhile gets herself free and runs outside. She hears Bruckner scream and after touching her necklace, realizes who saved her.

Devlin writes SHE’S MINE on a rock with Bruckner’s mutilated bloody hand then proceeds to bury himself and the still-alive Bruckner.

"Oh! Looks like you caught the old Crypt Keeper checking out one of his ghoulie magazines, which gives you a little hint about tonight's dead-time story. It's all about the way some guys just die over a pretty girl. But don't worry kiddies, if it starts to reek a little of rotten romance I think the title of our nasty narrative makes no bones about where it's heart is really at. I call it "The Thing From the Grave."

"Aww, wasn't that romantic? Blech! I would have called tonight's fear fable a "Boy meets Ghoul" story except the boy was the ghoul this time. Right, kiddies? Which leaves poor little Stacy fresh out of boyfriends. Oh well, I'm sure she'll dig one up somewhere." 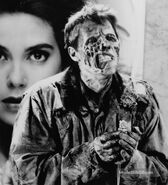 Retrieved from "https://tftc.fandom.com/wiki/The_Thing_From_the_Grave?oldid=10920"
Community content is available under CC-BY-SA unless otherwise noted.