"She's hot...NOT! A man discovers too late the secret of a sexy masked woman he meets at a party."

Tales from the Crypt #38

A violent, hot-tempered man goes to a Halloween party hosted by his ex-wife, where he meets a mysterious but beautiful masked woman who needs more help than he does.

The story opens with a Halloween party, where an abusive man named Carl (Peter Onorati) shows up despite knowing he wasn't invited. His friend Bob (Stephen Liska) asks him to leave since he could get in trouble with his wife but he refuses, promising that he will leave after taking a drink. Bob's wife is friends with Carl's ex-girlfriend, and promised her Carl would not be attending the party. The ex-girlfriend, whom Carl was very abusive with, sees him, she starts a fight with him and Carl claims that he should've given her what she deserved and killed her, Bob shows up and tells him to go away but is too intimidated by Carl to do anything.

An angry Carl walks into the kitchen and destroys a pumpkin, then he notices a masked woman in a black provocative costume (Sherrie Rose) sitting alone, quietly eating. The woman makes a remark about Carl's temper, Carl tries to justify his actions by claiming that "certain actions deserve certain justafable actions", the woman agrees and Carl asks what is she disguised as and she says she is a body bag ("a synthetic shield with a corpse inside") since the invitation said she should come as she is. The woman then unfastens her dress, exposing herself to Carl, then quickly zips up her dress and states that she has to go before she "lost what little mind she has left" since she hates how men hit on her and allows Carl to accompany her home. He asks the woman for her name, she asks what does he want her name to be and he chooses "Molly", to which she says "what a concidence".

When Carl and Molly arrive to the decrepit building, Molly immediately takes off the dress and gloves, claiming that they made her too hot. They agree on no taking off their masks or revealing any personal information about themselves and have a passionate one-night stand, where Molly teaches Carl to get rid of his anger through sex.

Later, Carl wakes up in Molly's bed and sees a man standing in the doorway screaming but when Carl tries to get a better look at him, he is gone. Carl then hears power tools and calls for Molly, who is nowhere to be seen. When Carl approaches a certain room, Molly quickly leaves the room, now wearing a white nightgown and holding a power hand saw and say she's making a stand. Molly walks with him to the bedroom, where she gives Carl a drink and lays on the bed next to him. Carl starts about the great time he had "last night" while Molly just says that it was only an hour ago, rather uninterested in what Carl is saying. Having developed feelings for her, Carl tells Molly that she "cured" him and now wants to know everything about her but she refuses as she doesn't want him to know her but he persists, saying that his anger and need to hurt is gone and that he won't hurt her, although when he realizes that she is already asleep he gets angry and roughly flips her onto her back to wake her up. Carl apologizes and tries to talk her into letting him in, telling her his last name, which is Schlage and that he is an accountant CPA and takes off his mask but Molly simply falls asleep again after telling him that she expects him to be gone forever before she wakes up. Carl curses at her and leaves the room.

Carl then searches through Molly's medicine cabinet, her purse and mail, but to no avail as even her mail merely says, “resident” or “occupant.” Dizzy from the strange drink she had given him, he wanders into the room she had been working in and finds a wardrobe with “masks” from men she has presumably lured into her home, one of them being the man Carl saw in his "dream". Horrified, Carl tries to confront Molly and the two get into a fight where Carl accidentaly cuts Molly's hand with her own saw when she tries to defend herself and he rips off her mask. However it does not come off as it really is her face. She attacks him and removes his face for her collection.

"Hmm, I see your raise and I call! Bleed 'em and weep! Spades beat hearts every time. Oh, hello creeps. So glad you could join me for my weekly game. My deal! Hacks and chokers are wild. Are you in? Good. So's the man in tonight's terror tale, except his game is relationships. It's a ghoulish little gamble I call Only Skin Deep."

"I guess that's one way to wear a guy out. Still, I think Carl and Molly make a hell of a couple. I mean, talk about boo of a kind. Okay, I see your raise and raise you $20. Call."

[poker stabs skeleton in the eye] 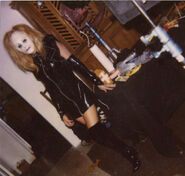 Sherrie Rose behind the scenes

Retrieved from "https://tftc.fandom.com/wiki/Only_Skin_Deep?oldid=10584"
Community content is available under CC-BY-SA unless otherwise noted.