"They're wed, then dead. A young man kills the wealthy biddies he marries. But some vows must be kept."

None But the Lonely Heart

Tales From The Crypt #33

None But the Lonely Heart is the first episode of the fourth season Tales of the Crypt and the thirty-ninth episode overall. The episode was released on June 27th, 1992.

A con man (Treat Williams) finds a new wealthy widow (Frances Sternhagen) excited to have his company, but it seems that someone is on to him as he soon gets a series of notes warning him to stop on what he's doing or else risk facing the dire consequences.

Howard Prince is a con man who works with his partner, Morty. However, the two are on the brink of being arrested by the IRS for they are due in court for tax evasion, so they plan is for Howard to marry wealthy old women and kill them for their money. With the aid of Baxter, a video dating service owner who is unaware of Howard's plans, he was able to find the most wealthy elderly women in the city. Howard woed the widows Clair, Elizabeth, and Matilda in succession and married them -- then, one night, he gives the butler the night off and sets up a romantic dinner for two. The women have a glass of red wine, which Howard poisons as he didn't have a drink himself, the woman dies from a poison-induced heart attack, and Howard calls 911 at the last minute and pretends to be hysterical about his wife having a heart attack. He even justifies himself to Morty saying that he is doing them a favor by killing them instead of just taking the money and leaving for that would be cruel and unusual.

Howard's latest victim is a widow named Effie Gluckman. As he is trying to woo Effie, he repeatedly receives messages telling him to end his crime spree or face the consequences. The first message he got, he felt like he was being set up by Morty, so Howard went into Morty's office as he was shredding incriminating papers, grabs Morty by the necktie and gets it caught in the paper shredder, snapping Morty's neck as the tie is being pulled by the paper shredder. The next day, after marrying Effie at City Hall, Howard gets a second message telling him to stop, so he thought Baxter caught on to his crime, so he kills Baxter by grabbing him by the tie and throwing him head first into the television set, electrocuting him. That night, as he is preparing the fateful dinner for him and Effie, Stanhope, Effie's butler, threatened Howard with a gun, saying that he knew about him being the widower of Clair, Elizabeth, and Matilda. Stanhope gives Howard a chance to leave and never come back, but Howard declines, attacks Stanhope before he could fire and snaps Stanhope's next, military style.

Everything is going according to plan, but as Howard tries to call an ambulance to cover his tracks, he has to change his heart attack story when Effie wouldn't succumb to the poison, so he throws her down the staircase and tells the 911 operators that she fell down the stairs. Days after Effie's funeral, ass he getting a plane ticket out of the country, he gets one more message on his door. There was still someone out there telling him to stop. Howard was told to meet the messenger at Effie's crypt, who turns out to be the grave digger himself. He tells Howard that he sent the messages warning him to stop, but before he could tell Howard who hired him, Howard grabbed the grave digger's shovel, saying there is a penalty for wasting his time, and he killed the grave digger with the shovel.

As Howard is about to put the gravedigger in Effie's coffin, he sees that it's empty. He then hears a voice and turns, for it was Effie, who had come back as a zombie. However, she isn't the only one who came back as a zombie -- Matilda, Elizabeth, and Clair have risen from the dead as well, each woman's appearance worse than the last. Howard tries to escape, but he is surrounded. They say that they can't live or die without Howard, so in order to rest in peace, they all eat Howard alive.

"Damn you Marcel! I told you they wanted violence, not violins. Good help is so hard to fiend isn't it, kiddies? Want a little bit more cham-pain? I hope you're hungry for tonight's murderous menu. It concerns a man who's discovered that the fastest way to a woman's heart is with a pickaxe! I call this tasty little horror d'oeuvre None But the Lonely Heart."

"Now that's what I call a happy ending. I had a feeling Effie would win Howard's heart. Not to mention his spleen, his kidneys and his gall bladder. So, will there be anything else?"

[head falls off of skeleton sitting next to Crypt Keeper]

"Mmm. I love a ghoul who gives you head and then lets you keep it." 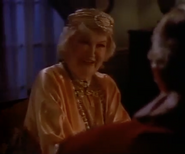 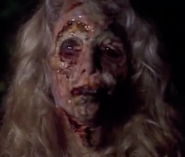 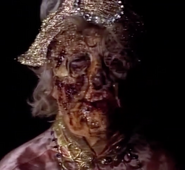 Retrieved from "https://tftc.fandom.com/wiki/None_But_the_Lonely_Heart?oldid=11021"
Community content is available under CC-BY-SA unless otherwise noted.