"Cry murder! A woman sees a doctor kill his wife, loses her voice and is put in a mental ward by the doc."

Young woman Suzy looks out of the window of her apartment and witnesses a man murdering a woman in the apartment directly across from hers. Suzy is so traumatized by what she sees that she's rendered mute. Suzy is placed in the care of Dr. Trask, who alas turns out to be the man who committed the murder she witnessed.

"Good evening, kiddies. I just had quite a scare. I actually thought my heart was beating again. Tonight's twisted tale is a villainous voyage, a murderous medical madness that scream out the cryp-sequences of getting too nosy with your neighbors. So the next time you stare into someone's window...remember: curiosity killed the cat."

"Where's Houdini when you need him? Well that was quite a scream, wasn't it kids? And what a surprise for poor Dr. Trask. There's a villain with a heart. Attack, that is. Just when he thought he was going to silence Susan forever...she walked all over him. I supose you're wondering what became of Susan. If you give me a scream, I might just tell you!" 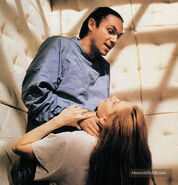 Retrieved from "https://tftc.fandom.com/wiki/Mute_Witness_to_Murder?oldid=10350"
Community content is available under CC-BY-SA unless otherwise noted.