"Now try to get rid of her! A wannabe writer gives the woman of his dreams a powerful love potion."

Tales From The Crypt #25

In Los Angeles, aspiring screenwriter Edward Foster from Indiana has a crush on his neighbor Miranda Singer. However, bimbo Miranda is a gold digger who does not give Edward any attention. His unrequited love is noticed by his creepy landlord, Mr. Stronham, who offers Edward a love potion in order to seduce Miranda. Will the potion work?

Edward, an aspiring screenwriter, moves into an apartment in Hollywood where he meets Miranda, an aspiring actress. He immediately falls in love with Miranda, who barely notices him and has even less affection for him. Miranda offers to meet him for a date one day only to keep Edward waiting for five hours, while she brings another man home, and forgets about her date with Edward. The landlord, however, notices this through the cameras. One day, when paying Miranda a friendly visit, Edward gets into his fantasy mode and gropes Miranda, which angers her. She immediately kicks him out of the apartment.

Soon, it is time for Edward to pay rent. He goes to slip an envelope under the landlord's door but it mysteriously opens, as if inviting him in. Edward sees a wall full of pictures of women. Inside, the landlord reminds Edward of how he waited five hours for Miranda. He then asks Edward if he loves Miranda. When Edward answers in the affirmative, the landlord offers Edward a love potion to win over Miranda's affections. The effect is permanent. When Edward goes back the next day to win Miranda's forgiveness, she coldly lets him in and tells him that the only way he can do so is to move out of the building. He prepares drinks for both of them and quietly slips the love potion into Miranda's drink. She quickly imbibes her drink and tells him to leave immediately. Apparently, the love potion has not taken effect yet. She calls 9-1-1 to have the police escort him out of her building. But that is when the love potion takes effect. She immediately wants to passionately kiss him, eager to have sex with him. Before long, both are naked and spending the night together. The next morning, Edward is spent from a night of lovemaking but Miranda, also naked, is ready for more lovemaking. She professes her love to him and makes him have sex with her again. Taken by surprise by this, Edward reminds Miranda that they've been going at it all night. She doesn't seem to care. Soon, they are passionately kissing and beginning to have sex once again.

Later, Edward is working on a script while Miranda adoringly looks at him. She then attempts to sexually please him. After many more instances of having sex, Edward is tired and unwilling to continue having more sex with her, but Miranda is ready for more. As Edward lays tired on their bed, Miranda approaches him wearing exactly what he imagined in his fantasy, then boasting that she's not tired nor "drained out", she rips off her housewife outfit to reveal lingerie underneath and attempts to have sex with Edward. Edward continues to fight her off and try to escape while Miranda is begging him to make love to her, which is loudly overheard by one of the neighbors (much to their amusement). As Miranda proclaims her love for Edward and tries to get him to love her, he tries to escape her and as she tells him to hit her and hate her and be mean, Edward has no choice but to punch her so hard that she falls on the bed. Edward seems somewhat relieved but then Miranda is unaffected by the punch and tells Edward that he could never be mad at her.

Edward hurries to the landlord who tells him that the potion's effects are permanent and that the only way out is either to kill Miranda. Edward, hesitant at first, realizes that may be true. Not prepared for the consequences of the love potion, Edward then realizes who the women in the pictures are. All of them were "victims" of the love potion. Edward reluctantly takes the fatal poison from the creepy landlord and goes back to Miranda. He again prepares two more drinks, one of which contains the fatal poison. Miranda takes the drink but before she could even drink it, she notices that Edward's glass is dirty and switches the drinks. The non-poisoned drink is in a dirty glass while the poisoned drink is placed in a clean glass, which Miranda gives to Edward. Edward accidentally takes it and falls dead. Edward wakes up and discovers he's in the afterlife, all dressed in white with the others who have passed on. He seems to believe he is in a good place until he hears Miranda's voice calling for him. Suddenly, Miranda appears walking toward him and Edward doesn't like what he sees and for good reason. Miranda details her love for Edward and how she's missed him so much after he died that she committed suicide by jumping out the window. Even though Edward died unintentionally and Miranda died via suicide, somehow they both end up in the same place in the afterlife. Miranda, however, is disfigured from her accident and this disfiguration seems to somehow follow her into the afterlife. She then advances upon Edward. Edward then realizes that he is stuck with her in the afterlife for all eternity. Likely, Miranda will stay disfigured forever, too. His scream upon realizing this horror is priceless.

"Dying for a date? Aching for a little prick of-"

"-passion? Well, be careful what you what you wish for or like the young man in tonight's terror tale, you may just get it! I call this nauseating number Loved to Death."

"Good old Edward. He should have stuck to sending mash notes. Maybe then he wouldn't have ended up in a state of holy deadlock."

[Crypt Keeper takes a smoke of cigarette, and turns to the skeleton next to him] "So, was it good for you, too?"

"Oh, talk about head over heels."

Now we can be together forever. 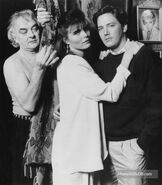 Retrieved from "https://tftc.fandom.com/wiki/Loved_to_Death?oldid=10354"
Community content is available under CC-BY-SA unless otherwise noted.