"For the money, honey! A gold digger marries a slob in hopes of gaining an inheritance."

Dead Right is the first episode of the second season of Tales of the Crypt and the seventh episode overall. The episode aired on April 21st, 1990.

A gold-digging secretary (Demi Moore) follows the advice of a fortune teller (Natalia Nogulich) and marries a slob of a man (Jeffrey Tambor) after being told that he will die shortly after inheriting a large sum of money, but the fortune teller's prediction comes true in a way that the gold-digger herself does not see coming.

A secretary named Cathy Finch is arrogant and gold-digging, searching to marry a man only for a new special status. On her lunch hour that day, she goes to see Madame Vorma, a psychic medium, at the request of her friend Sally. Madame Vorma predicts that Cathy will lose her job, but will find one by the end of the day. Cathy believes the medium is a swindler and doesn't believe her prediction, insulting her before going back to work. While at the office, Cathy is fired by her boss for coming back to the office late. A hour later, she is walking down the street and walks by a hostess bar, where one of the waitresses has been fired and is making a scene on the front steps. The owner of the bar, in a fit of rage, tells the waitress that she is very easily replaceable and yells at Cathy, offering her the former waitress's job.

Intrigued by the turn of events, Cathy goes back Madame Vorma for another prediction. The gypsy predicts that, later that evening, Cathy will meet and marry a fat man who will inherit a large sum of money, then die a violent death soon after. Cathy concludes cheerfully that she is going to be a rich widow. That night at work, she meets Charlie Marno, an obese and unattractive man, who becomes attracted to her. In spite of her disgust towards his ugliness and obesity, Cathy feigns interest in him, figuring he must be the man the medium spoke of. Cathy marries Charlie and resists his amorous advances until she figures his eventual death is forthcoming, imagining such things like him dying of a heart attack because he is obese, or possibly a street accident as he is somewhat klutzy. However, three months pass and there is no impending sign of death. Cathy also remembers that Charlie said he had an uncle in the midwest who owned a successful factory, thus that must be the predicted inheritance. One night she asks about her uncle-in-law, to which Charlie replies he has been hospitalized. Cathy asks if Charlie will take over the factory, and Charlie replies that since his uncle is married with several kids, his rank in the line of succession is pretty low. Cathy goes to bed angry.

The following day, Cathy goes to an Automat to buy a cup of coffee and Danish, when suddenly confetti rains from the ceiling and Cathy is met by the CEO of the Automat chain, who claims she is the five-millionth customer and is awarded his prize of one-million dollars. Although Cathy is ecstatic with her good fortune, she comments to herself that the gypsy was wrong.

Some time later, Cathy returns home enjoying a small part of her new fortune, wearing a nice dress and new designer purse. She tells Charlie she wants a divorce, insulting his weight and goofy attitude and calling him a fat, disgusting slob. Unfortunately, this sends Charlie off the deep end and he attacks Cathy with a knife in a jealous rage, shouting "If I can't have you, no one can!" as he stabs her to death. Charlie ends up inheriting Cathy's winnings, and the murder was discovered by authorities and Charlie was found guilty of second-degree murder and sentenced to the electric chair. A television report about the murder and execution is shown, which is watched by Madame Vorma, remarking to herself how she is always right.

"I look into the future, my darlings... and for you, I see something... grotesque. It will sicken and disgust you! It's me!

Tonight's tale is a sickening stab at suspense, about a gold digger who wanted big bucks to buy baubles and bangles. Look out, Cathy! I see you might just buy the big one!"

"Poor Cathy... she did buy the big one... and that Charlie, what a cut-up. Still, he wasn't sad in the end. You see, when Charlie got his just desserts, he requested seconds! And now, I predict the future... next week, you'll be at the same time, same place, same station, for another hideous, hateful hall of horror."

Part 8
Add a photo to this gallery

In The Cards Edit 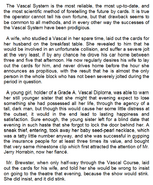 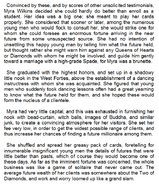 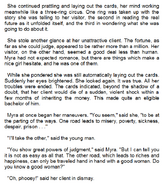 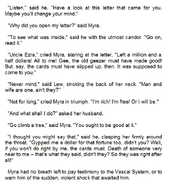 Part 7
Add a photo to this gallery

Retrieved from "https://tftc.fandom.com/wiki/Dead_Right?oldid=10937"
Community content is available under CC-BY-SA unless otherwise noted.